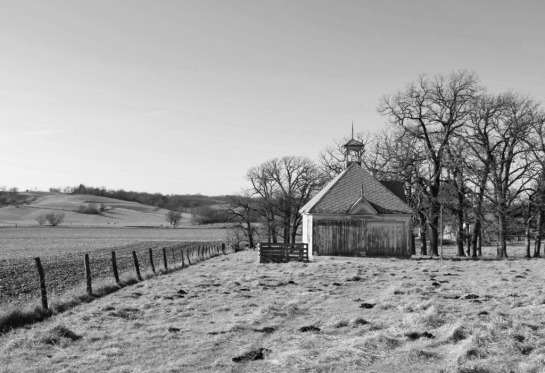 This image of an old schoolhouse was taken in rural Iowa, by American photographer David Sebben. See more of David’s work here.

Look at me. Standing here under the wintry sun having walked three miles up hill and now me sweating and panting like some herded animal. I should have met him at the house, lord knows he’s passed out drunk somewhere without the slightest recollection of our talk yesterday. He stank of booze then and he’ll stink of booze now. If he were an easier man to pin down I dare say I’d like the old fella. But as it stands I been here nearly a half hour and he’s nowhere to be seen and in my eyes that makes him a drunkard and a layabout and a waste of space and in particular my time. It is beautiful up here though.

Well strike me down lord look look here he comes now, the old man Liles walking on over here I see him. Could only be him. Jesus look at that greasy hair, all tied up under that ranger hat, as battered and worn as he is, the old goat, sweat drenched shirt with stains in the pits, if I wasn’t surrounded by cowpat I think I’d smell him from here, and he’s swaying, one side to the other, what a sight. He’s been drinking all day I guarantee it, and only as a means of continuing from the night previous, hell what a state of a man. Good-natured and mild-mannered by all reports, but I mean unclean, don’t give a damn about his appearance, not slightly, cares even less about what other folk think, but by accounts other than my own he’s just odd, a strange lonely man and being strange weren’t a crime last time I checked. People don’t like dealing with him but he’s done me no harm, folk like rumours and treat rumours as fact. Truth is I think folk are jealous of this lucked son of a bitch, he owns more land in this valley than there is land to own, and no family or woman or child to drain at his resource, all the more for him to spend on whisky and whores. Or whatever he spends it on. Maybe he’s not interested in what women can give him – like I said, I don’t know the man. Maybe he just likes being alone. He’s not a normal fella but he is rich, and I think he would rather have nothing and do without all the prospectors and farmers who pester him every day like flies round shit, but if you own as much land as old Liles does then there will always be folk looking to do business, land is the most valuable thing there is they say, and there’s some beautiful land round here and everyone wants a piece. He’s only selling what he has to, and even then it’s the land furthest from the house, so he don’t get disturbed. Neighbours are the last thing old Liles wants. Well I don’t plan to stay long. I just want my piece, I don’t need much but if I can get what I want I might be able to make a mark. Make something of this life anyway. Here’s the old goat now.

“Morning Liles.” Joe Abbott said as the old man approached.
Samuel Liles waved or swatted a fly. He was half drunk when he woke this morning but that was three hours ago and he’s had more whisky since.
“How’s the day treating you, kindly I hope?” Joe Abbott asked. The old man stopped near the fence a safe distance from the younger man enquiring on the land. Joe Abbott continued.”Was starting to think you weren’t coming.”
“Let’s make this quick.” The voice of Samuel Liles was quiet but it was not weak. As if were being suppressed beneath a pile of gravel and dirt.
“Sure Sam. If that’s what you’re wanting.”
Liles put a hand against the fence to steady himself and looked across the valley. “Everything you can see here is mine.”
“Yes.” Joe Abbott said.
“So point out what you’re wanting.”
Joe Abbott looked at the land for a while, then pointed. “From this stump here to the rise over there. Or whatever you judge to be two-fifty square feet. And don’t you try and stitch me. I’ll be getting it verified by those surveyors in town.”
“Do you want the barn?”
“No need for it. How much you thinking?”
“Fifty dollar. Sixty with the barn.”
“What’s in the barn?”
“Nothing worth having.”
“I’ll leave it then.”
They stood, having established the land and its boundaries, in the long grass and the afternoon was calm and the valley was silent.
“Now what?” Joe Abbott asked.
“The land is yours as soon as I get the fifty dollars. Put it in an envelope and leave it at the house. Leave the forms to me.”
“Don’t I need to sign anything?”
“I’ll send them into town. They’ll be at the post office by the end of the week.”
And with that old Samuel Liles swayed back in the direction of the house.
“Pleasure doing business with you Liles.” Joe Abbott called out to the old man, but the old man did not respond, so he turned back and studied the land he had purchased. He smiled and muttered under his breath. Old goat.