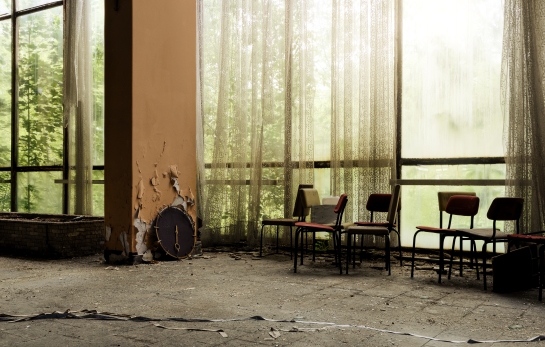 This image, taken in an abandoned VEB in Eastern Germany, was taken by Johannes Burkhart. You can see more of Johannes’ work on his Flickr photostream.

The blood trail led him to an opening in the trees and a building emerged from the forested landscape that took him somewhat by surprise. His eyes searching not for static mass but a limping creature with frenzied eyes and fur slick with sweat, instead found this concrete structure.  For some time he watched it then scanned the ground for blood before lowering his rifle to study the structure once more. An old factory or manufacturing plant he guessed. But no sign of blood or disturbances in the undergrowth and no sight of a dead or dying deer. Don’t crawl off and hide somewhere to die friend, he whispered, that way neither of us win. Advancing across fallen leaves he approached the entrance, observing faded graffiti amongst creeping ivy. A crash echoed from inside the building, distant but contained. You are not allowed in there friend, he said, and he crept up the steps and tiptoed through broken glass.

Into an atrium with a tall ceiling and tall windows caked in moss and birdshit. The last of the afternoon sun shone through over obsolete items of degrading furniture and peeling paint and a clock that had once hung now rendered inert. He stepped across patches of rotted carpet and spotted small droplets of blood. Empty beer bottles and used needles wrapped in dirty linen. So you are in here, he said. He saw burnt magazines and papers from another era and in articles and time-dulled images were unfulfilled promised that remained firmly in the past. Smiling faces and shiny automobiles and cheap weaponry. None of this means anything anymore, he thought.

He reacted to movement in his periphery. Against the illumination of a large window the erratic movements of two small silhouettes. Staying low he crept forward through chairs and tables to see two stunted children in tattered rags standing over the now deceased deer. He watched as without warning they fell upon the carcass, hunched over and tearing at it like savages and one, a male, was already skinning the still-wet fur off with a knife, basking in the warmth of the beast. The deer with limp head and loose tongue and glass eyes that only now could understand these ways and these rules lay on the cold concrete slab between them, fate accepted with a primal nobility. The hunter coughed and made his presence known. “That’s my deer.”
The two children jumped back and looked across with fear and dripping hands. A boy and a girl. “Who are you?” The girl asked.
“I’m the owner of the deer you just started to butcher.”
“This is your deer?”
“Yes. Of course it is. How many deers have just walked into the room you are in and died at your feet? Are you really that stupid?”
“But the deer wasn’t dead. We killed it. My brother grabbed it and snapped its neck.”
The hunter observed the boy. He stood tall but there was no power to him, no strength in his shoulders. But the children did look hungry and hunger was a powerful stimulant, the hunter thought.
“Even so – I wounded the deer. With this rifle. I shot it in the thigh, which has made walking incredibly difficult and tiring. I have been following it for hours. I know how tired it must be. It was exhausted and crawled inside this building to die.”
“And this is enough for you to lay claim on the deer?” the girl asked.
“Of course! I tracked the deer, I shot the deer, I chased the deer. Do you think the deer would have entered this place unless it knew it was to die soon? So you see, really, you did not do anything that was not already going to happen.”
The children were silent.
“Now get out of here,” he continued, “I will try to fix the mess you have made.”
Sullen and weak they walked out of the atrium and into the forest. He watched them go before turning his attention back to the deer.

Later the hunter made his way out of the building with the carcass over his shoulders and in the cool evening darkness was falling fast. Exhausted and in need of sleep but unconcerned by the events of the day. He travelled north east towards his parked truck just over three miles away. Halfway there he stumbled blindly and fell into a ditch. His rifle was lost to the night and face down in the damp soil he listened to the carcass as it slid down the bank. It came to a standstill in a slow moving stream far below, and howls rang out through the trees and through his flesh and through his bones. Tearing, snarling, ripping. Moonlight flickered in the eyes and bared teeth of wolves as they set upon the deer, now mutilated beyond any point of recognition, with a ferocity that shocked the hunter as he gasped and retreated back up the hill.