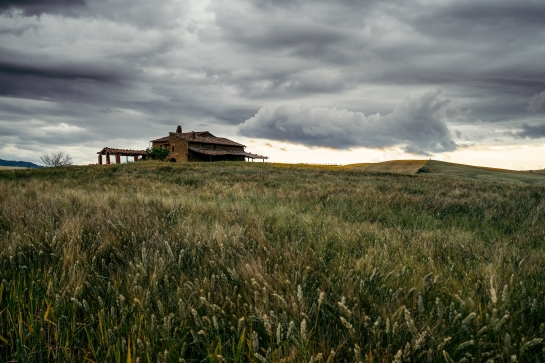 Image taken by Italian landscape photographer Edoardo Angelucci. See more of Edoardo’s stunning work on his website, and also be sure to check out his flickr page.

Youth was a grand farmhouse on a hill, surrounded by fields of long grass and crops that spread for miles around in every direction, under the clearest blue skies and a strong sun that drove dozy cats into the shade and kept stone walls warm deep into the night. It was the air, pure, clear and yet thick with a fragrance that lingered on your person where ever you went. It was distant relatives, or were they friends of the family, who cooked for large crowds around the kitchen table, shouting and laughing and at peace with one another and with the land they shared.

A squat man stood labouring in the soil, his sweat dripping onto the very earth he was cultivating, and on approach he stopped and leant on his hoe, to listen closer.
Where can I find the podere capriccio?
He considered the question for a long time. A long time. Then he raised his right arm, a sun-burnt arm with thick black hairs, and listed it lazily from north to north-east.
Thankyou.
The squat man turned back to his work and did not look up again.

Memories had been formed around the farmhouse but of the surrounding area nothing was certain. These eyes have changed with responsibility and the irreversible damage of age. As vivid greens were now dull browns and once lush and fertile fields were barren and forgotten. Sand coloured dust tracks were gone and in their place printed tyre treads in the mud. Faraway pylons stood defiant and tremendous in scale, their lines powering the little specs of light in the valley. Would it still exist? The building, but more specifically the feelings it once evoked. If not for him then for some other family, a generation of descendents linked not by blood but by land.

On the horizon the distant shape of the farmhouse grew and it became clear the place had long been abandoned. Approaching slow in a void silent, interrupted now and again by the sound of the wind passing through broken windows and creaks from disjointed frames. Inside the layout was as it had been but the atmosphere was not. The air thick with dust, musty and warm. Brown wilted ivy and vines crawled over walls and overturned furniture, and paintings and picture frames lay where they had fallen. It was impossible to tell how many people, and who, had lived in this house after he. To recall its past appearance caused nausea and vertigo, and the walls seemed to pulsate gently. Memories that had never been defined by time felt old and devalued now. Nostalgia replaced by loneliness. Leaving the house and walking out into the dry fields under sporadic shadows of dead and dying trees, downed tools lay rusting in the soil.