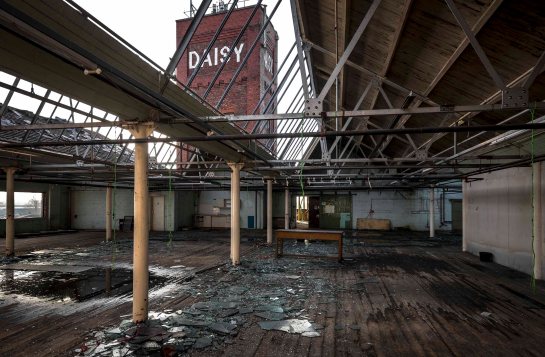 Abandoned buildings are fascinating. This photograph is by Flickr user Camera_Shy. See more stunning work in a variety of amazing, creepy, beautiful places at Mark’s website.

The glow of the beacon bathed his gaunt face in unnatural light. Exposing grey hairs and deep creases on his dirt crusted skin. At night the sky was a void, some black vortex which consumed sight and sound and stars and if the streetlights still illuminated streets at night like in his memories then they too would be consumed. But tonight was unlike other nights. A distant beacon, rebellious and pink pulsated in an act of defiance against the night’s sky. Illuminating Daisy’s tower. It looks beautiful. I’m coming Daisy, he whispered.

She was an idea of desperation that grew from seeds of loneliness. Immeasurable time spent on his own in darkness, what that can do to the senses and to a state of mind. There were times he questioned his existence, and if he were anything more than a shadow, or shallow breath on the wind. Yet shadows do not fear and shadows do not flee. The tower had been empty when he was a scavenger but that was several months ago and in the time that had passed Daisy blossomed despite the lack of light. Lack of light and of any other soul, sentient or otherwise, to hear him talk or curse like some lost and forgotten martyr. Daisy kept him here and when the beacon lit up the sky he cried. Tears reflecting the kaleidoscopic bliss. I am coming. A scavenger then but an explorer now, of dead and dying streets with a rucksack and a rifle.

Perhaps I can only see the light, was the answer to his own question, which had been: why has the beacon attracted no one else? Because this place is burnt and all the neighbours are dead, was another thought that crossed his mind. A preferable thought, but then why would Daisy return? He stopped himself: you don’t know if she is called Daisy, you don’t know if this person wants help. The light crunch of broken glass and dull echoes of his footsteps and the scent of must and rot. I must take care.

Rusting supports and damp greased columns struggled for relevance in a redundant warehouse. Crystalline shards that could have been something beautiful once lay scattered on scorched granite beside a puddle of rainwater and motor oil. It was a dirty and degenerative place and the explorer knew this was the narrative for miles around. But morning arrives, and I am close, he thought, I am close. But this light is a curse, because I can see and I can be seen. Through the collapsed roof he saw the tower close all clad in brick and the letters seemed to speak to him and in the cold morning light he was scared. He could hear wild mongrels barking and fighting from below. Possibly a forgotten underground parking garage. He gripped the rifle. I must take care. I can protect her. Her name might not be Daisy but that’s what I will call her for now, until I know her real name, and even then I can still call her Daisy in my head.

He still had the capacity to catch himself at the end of an internal conversation and with the stage set, props dead and rotting materials, he stopped now to think. What if she’s not alone? What if she doesn’t need help. He remained standing there for a minute. It was light now and he could hear birds. I had not thought of that, he said to himself quietly. I had not thought of it that way.

Bitch, he whispered bitterly. Bitch. He turned to go back (to what?) then wrestled himself back around. The tower was in front of him, above him, taller than he could have imagined. His ears were ringing and he prayed for silence but the dull barking grew nearer, less monosyllabic; inane dialogue of subconscious entities that were watching constant and clever. Fear took hold and with the rifle he crashed through a doorway and ran breathless up the tower staircase and at the top into an office with windows on every wall. The light here was unbearable and there was nowhere to hide, but why was he scared? There was no one in the room, no one but tables, chairs, cans and bottles, a stove still warm.