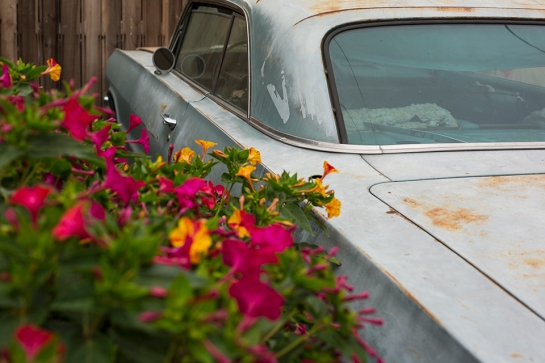 Josh Marcotte is a photographer from San Jose, California. I was fascinated by some of his recent work dealing with themes of abandonment and urban decay, but Josh has a plethora of other great galleries over on his site, www.lostsanjose.com, which is highly worth a visit.

The squatter woke and lay still on the sofa, his chest rising and falling under a stained sheet. Some noise from outside had interrupted his sleep but as he lay there he heard nothing else to worry him. Still he could not fall back to sleep so he got up and went to the window to look outside.

With caution he pulled the curtain, heavy with damp, back an inch and ever so slightly the room brightened, but it was still dark and it was still gloomy. It was mid-morning. The neighbourhood was in disarray. The world outside was loud and unpredictable. Cars with growling engines queued up outside as people walked past. The window from which he watched the street was almost entirely covered by thick bracken from the front garden that had gone untended for months, and yet he was knelt under the windowsill, peeking out like a hunted animal. No one had seen him enter, and no one would see him leave.

Later he sat in the hallway reading old newspapers and flyers for local eateries and manifestos of the district politicians that had piled up on the mat beneath the letterbox, while happily eating cold beans out of a tin with a fork found in the kitchen. When he was done he entered the adjoining room across from the living room where he had slept. It was stripped bare but from observing scrapes and indentations on the wooden floor he judged it had been a dining room. The front facing window was more exposed in here so he crawled, creeping at a low elevation. Slowly he raised his head and took an alternative view of the street. Now it was quieter. It was after midday but the sun was hidden behind cloud and he reckoned it would rain soon. Cars passed infrequent and at slow speeds. He watched the street and he watched the rusted Chevy Impala in the driveway.

In the driveway the Impala sat. It had seen better days but a stylish ride once, for sure. From the 60s or the 70s at a guess. He wasn’t a car enthusiast by any means – he did not have the practicality to keep a car well maintained. Naturally he’d owned a few vehicles in his time but they were exactly that, a vehicle, to him merely a method of transport, nothing fancy or fast and not something to affect him deeply, as others sometimes form a bond, an inexplicable source of gratification whilst driving, the vehicle a vessel for the spirit. But this Impala, it caught his eye when he passed through the cul-de-sac, not only due to its state of disrepair (and thus stirring the squatter’s interest in the potential availability of the house), but because his older brother had driven an Impala for a few years, and it reminded him of his brother, and of home, and he could almost smell the wax that his brother would apply generously, every weekend, and as it sat there in the sun, the Impala would smell glorious.

The Impala was less than a foot above the driveway, its flat tires long deflated. Tall strands of unkept grass were springing up over the bricks in front of the house but underneath the Impala were weeds, yellowed and browned. The Impala had not moved in a long time. There was some conflict over the nature of abandonment of the property, for beside the Impala was a beautiful hedgerow of blooming flowers. It had more colour than the rest of the street entirely. This had worried him, but he monitored the house, and he was careful, and he reasoned that rainfall had been high and the seeds had been sewn a long time ago.

Sitting on the other side of the window pane the squatter considered the strangeness of the contrast between the blooming plants and the rusting Impala. How strange it is, he thought, how some objects in this world react differently, when left to their own devices. Some things flourish where others will struggle. Some things survive, others wither and die. Some bloom, others rust. He considered the house he was in. Was it blooming, or was it rusting. With the squatter inside it was a home. It was providing him some warmth, some shelter, some protection. Without the squatter what would it be? A shell, cold, dark and empty.