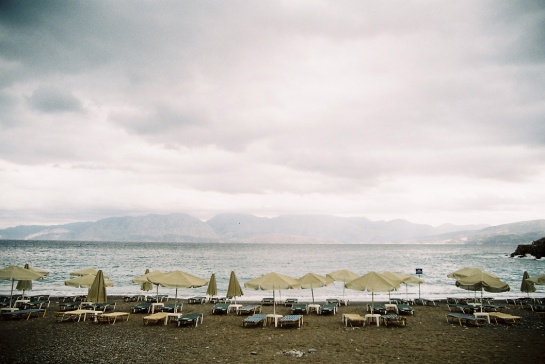 Photography by Fraser Douglas, a freelance photographer from Scotland. A beach on the island of Crete, and there are many more stunning images of beautiful landscapes at fraserdouglas.com

The morning was warm and close when they woke but the sky remained covered by thick cloud that cast unenviable gloom, a dull light, over the land. The prevailing wind was weak and thus today there was no cooling respite from the heat, and the wonderful scent they had become accustomed that would roll in from the Mediterranean, was absent. Visibility was, more or less, unaffected; the horizon was as always obscured by a haze caused by heat or strangled intentions.

And the group found themselves subdued in a strange way, all four of them under a spell of lethargy and not entirely without fear, hungover in their hotel room. After some time they shrugged it off, laughing: it’s lack of sleep! These late nights, our dark conversations and debates, accompanied by cigars and the local liquor, researching forgotten civilisations and irrelevant gods and mythology where there were no treasures left to be found. Not here, in the hills or mountains, the gorges and ravines, not here or anywhere. Let’s rest today. We have a few days left. This day felt strange, they all agreed but she, the sole female of the group, with a sense of obligation to achieve something during the trip, left the room as the others slept. Stepping carefully between beer bottles and filled ashtrays she slipped out the room and looked back through the gloom at the rest of them, sleeping on their backs with their faces to the ceiling. The darkened room was like a crypt, and she remembered to put the sign on the door warning ‘do not disturb’.

The lobby was filled with people milling around, indecisive and unsettled, as if waiting for the clouds to dissipate. Before leaving the resort she asked the concierge to recommend a quiet location on the coast. He told her there were many places on the coast that would be quiet, but he questioned her desire to leave the resort. The weather, according to the concierge, did not bode well. ‘Today is not so good’ he admitted with a tired smile, ‘but tomorrow – tomorrow is better.’

She ignored the concierge and walked out of the resort towards the coast. On her way down to the beach she noted there was little traffic. Few pedestrians walking the roads. One elderly man in a stained white shirt was leading a horse ahead of her, but she soon caught up as they walked slowly. It became clear that the horse had a limp, and as she passed the nomadic pair, the horse’s ears twitched and she saw the creature was missing its right eye. The horse nickered as she accelerated away and when she reached the beach she looked back for the man and the maimed horse but they were nowhere to be seen.

On the beach she observed forgotten towels covering sun beds. A collection of withered umbrellas, opened and closed, stood idle like cocktail decorations. She took off her shoes but the sand was coarse, rough on the soles of her feet, and she moved slowly, approaching the water but unprepared to go in. Across the water there was distant land. She knew it was all connected but it looked like a different place entirely. Was it better across there, across the water? Was it easier. A sharp crack echoed across the beach. It came from the road, but there was no sign of movement, no sign of disturbance, and yet the sound reverberated across the beach and back again. A ripple of anxiety and self-doubt. The beach felt unsafe and she wanted to go back, but she stayed where she was, amongst the obsolete sun beds, looking across the water.