The claustrophobic, vertical society portrayed by JG Ballard will ask you to suspend your disbelief. And if you can, it’s an uncomfortably thrilling read.

Written by the late JG Ballard, High-Rise was published in 1975. Typically many of Ballard’s works touched on dystopian and post-apocalyptic themes, but what is explored in High-Rise is more social and psychological, a study of classes in a contained environment. 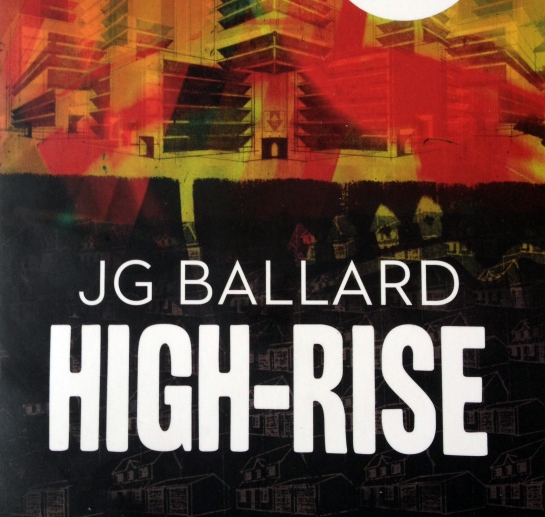 The high-rise, the titular building is a character in itself. From the very start it dominates our characters thoughts and fears. A self contained environment for established, educated professionals, the skyscraper soon fills its capacity of two thousand inhabitants living on forty floors. Within its monolithic structure the residents can find swimming pools, gymnasiums, shopping centres and a school, and high speed elevators keep this vertical city in motion.

She referred to the high-rise as if it were some kind of huge animate presence, brooding over them and keeping a magisterial eye on the events taking place.

Teething problems are to be expected in any new building, and the high-rise is no different. Temporary power failures and minor disagreements and loud parties across the building which cause bottles to fall from above onto unsuspecting balconies below. As time progresses the conditions within the high-rise seem to degenerate at an alarming rate. Power outages are longer and more frequent, issues with garbage disposal chutes lead to litter and debris covering the corridors, lobbies and stairwells, and general unrest among different floors causes arguments and great tension.

The occupants of the apartment block are divided into classes, which are in a way literal. The upper class are those on the upper floors, featuring the more luxurious apartments and generally unaffected by the problems of the strained infrastructure. The middle class occupy the middle floors of the high-rise, and the lower class reside on the bottom ten floors.

A new social type was being created by the apartment building, a cool, unemotional personality impervious to the psychological pressures of high-rise life, with minimal needs for privacy, who thrived like an advanced species of machine in the neutral atmosphere. This was the sort of resident who was content to do nothing but sit in his over-priced apartment, watch television with the sound turned down, and wait for his neighbours to make a mistake.

High-Rise has three central protagonists. Anthony Royal is the building’s architect and represents our view of the upper class. Dr. Robert Laing is a professor and lecturer at a nearby London college and is our point-of-view for the middle class. And Richard Wilder (note the name) is a television director currently working on a documentary about human behaviour, who lives on the second floor of the building and must face the disdain of the floors above.

Five floors were without electricity. At night the dark bands stretched across the face of the high-rise like dead strata in a fading brain.

As garbage and trash clog up the stairwells and lobbies and debris from the balconies surrounds the ground around the high-rise, the lower floors struggle to cope, resenting the floors above. Meanwhile the amenities that are to be shared are fought over, with the upper floors attempting to defend their upper floor swimming pool and rooftop gardens. During one particular blackout at the end of the first week, a dog is drowned in the pool and a woman sexually assaulted in an elevator. The resentment between these classes is real and strong, and soon becomes violent.

Not for the fist time Laing reflected that he and his neighbors were eager for trouble as the most effective means of enlarging their sex lives.

At night the high-rise becomes a war zone. Apartments on the same floors start to strike up raiding parties to attack and steal from rival floors. Life outside the high-rise ceases to be relevant as the occupants regress and give in to primal urges. People are savagely beaten, even raped. The conditions within decay with the loss of civilised behavior. What’s more, the characters, while initially alarmed at the acceleration of violence and depravity, seem to enjoy being let loose, the freedom to do what they want. They choose to stay, to sleep during the day, wallowing in their own filth and leaving their jobs, unwilling to leave the high-rise in order to keep up their tribal warfare.

“A low crime-rate, doctor,” she told him amiably, “is a sure sign of social deprivation.”

Towards the end, small clans are formed and roam the building, dishing out extreme violence on any strangers. Dogs run wild throughout the building. Bodies lay in corridors, apartments, swimming pools. Through breaking down all social boundaries, these characters are able to discover their true selves.

The problem I have with High-Rise is that the conditions don’t seem extreme enough to cause such a degradation of social classes. Most of these people are well educated, intelligent, wealthy individuals. It’s not that I don’t think the upper class are capable of regressing into such a state that Ballard shows. I absolutely think they could, but not in these circumstances, certainly not as quickly as they seem to. What’s more, everything in the outside world is normal. Central London can be seen from the balconies. But these surgeons, pilots, businessmen, architects…they choose to stay in the high-rise, in squalor and risking their and their families lives. Ballard’s commentary on the effects of the high-rise of our characters is brilliantly uncomfortable, so much so, I could not understand why they would choose to stay.

In a sense life in the high-rise had begun to resemble the world outside – there were the same ruthlessness and aggression concealed within a set of polite conventions.

The lack of authority from outside is also puzzling. It is unconvincingly explained by Ballard but it’s not enough for me. The emergency services are not called or informed when a lawyer ‘falls’ from his apartment window on the 35th floor and splatters onto a car below? The police do not show up to investigate?

But isn’t that the point of fiction? To suspend disbelief? Ultimately I found myself disconnected from the plot and characters, a few of whom started as flawed but likeable before descending into crazed detestable creatures. Or perhaps Ballard was onto something. Because I, like the inhabitants of the high-rise, found myself somewhat infatuated by their primal, savage behaviours. I wanted to see just how low this society could fall. Uncomfortable, disturbed reading…but inexplicably captivating.

So as an actual story, High-Rise did not impress me. But as an experiment, a fictional study on social classes, it is fascinating. An intriguing concept, and Ballard guides us through the successes and failures of the high-rise with poise and incredible attention to detail. His descriptions of the apartments and balconies and structure of the tower are like a literary blueprint.