Anyone unable to understand how useful religion can be founded on lies will not understand this book either.

Like all of Kurt Vonnegut’s books, Cat’s Cradle is typically difficult to nail down in terms of genre. To define his books as science-fiction is like calling Moby Dick an adventure book; there’s much more to them than that. It is science-fiction, but there’s a hearty dollop of satire. And while it’s a tragic tale, the way its written reads more like a comedy. Vonnegut’s fourth novel, the book was published in 1963. 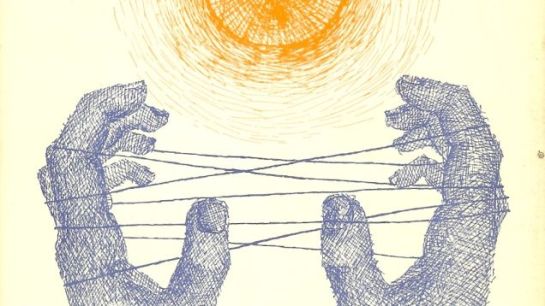 The narrator of this story is John, or Jonah, who is attempting to write on what Americans were doing on the day the bomb dropped on Hiroshima. We follow him on his investigation into the life of the late Felix Hoenikker, the father of the atom bomb that killed thousands in Japan and brought WWII to an end. To learn more about him he contacts thes the three Hoenikker children, still affected by their father’s life and legacy, and it is through them he stumbles across Hoenikker’s last and most deadly invention, ice-nine. A blue crystal like substance, split into three and owned by the Hoenikker children, that upon contact would crystallise every droplet of water it touched, turning the Earth into a blue frozen tundra.

After the thing went off, after it was a sure thing that America could wipe out a city with just one bomb, a scientist turned to Father and said, ‘Science has now known sin.’ And do you know what Father said? He said, ‘What is sin?’ Felix Hoenikker. The bloke who invented the atom bomb. Promising. . .

John’s investigation takes him to the republic of San Lorenzo to interview Dr Julian Castle, where he is introduced to a number of strange and interesting people, including Dr Castle’s son and the owner of the island’s only hotel, Philip Castle, ‘Papa’ Monzano the island’s old and terminally ill dictator, his daughter Mona Monzano, the most beautiful woman John has ever seen, and the three Hoenikker children, Frank, Angel and Newt. And it is through his eyes and writings we witness the end of the world.

Dialogue throughout is often funny and smart.

“He couldn’t stop. He walked out into the night with his flashlight. He was still giggling. He was making the flashlight beam dance over all the dead people stacked outside. He put his hand on my head and do you know what that marvelous man said to me?” asked Castle.

‘Son,’ my father said to me, ‘someday this will all be yours”.

Vonnegut goes to town creating the wacky island of San Lorenzo, with a rich cast of characters and strange traditions and the fascinating religious movement, Bokononism. Many of the most thought-provoking quotes are Bokononist teachings, and John reveals during his tale that he too has become a Bokononist through his experiences on San Lorenzo.

To my eyes there are two main themes within Cat’s Cradle. Firstly, Ice-nine, Hoenikker’s technologically (or biochemically?) bewildering invention, clearly representing weapons of mass production (more specifically atomic warfare given the book was published a year after the Cuban Missile Crisis) and the threat their mere existence poses to humanity. The science involved is astounding. . .but ultimately the vast amount of intelligence and hard work has gone into creating something primarily to kill. And as is shown, accidents can happen – it doesn’t necessarily take an evil madman to destroy the world. What is somewhat amusing in the book, but terrifying in reality, is how easily this ensemble of inadequate and flawed characters have access to a doomsday device that can end humanity. We see how recklessly the Hoenikker children use it to get their wants. Angela, for example, gives some of her ice-nine to the Americans in exchange for a stunningly attractive toy-boy husband. Frank trades some of his ice-nine to Papa Monzano of San Lorenzo to be a Major in Papa’s shambolic army. The poor, poverty-stricken San Lorenzo where fatefully, ice-nine is allowed to be unleashed on the world.

I do not say that children at war do not die like men, if they have to die. To their everlasting honor and our everlasting shame, they do die like men, thus making possible the manly jubilation of patriotic holidays. But they are murdered children all the same. Vonnegut perhaps warming up his war-weariness for his most renowned work, Slaughterhouse 5.

Which leads to the second major theme of Cat’s Cradle, religion. Bokononism is Vonnegut’s calypso/Carribean themed religion, and the native religion on San Lorezno. The general theme is that we are attracted to certain people and objects throughout life, and those within the same group, a karass, are linked and somehow intertwined through the will of God. Within John’s karass is Dr. Felix Hoenikker and his three children along with many of the characters he encounters in San Lorenzo. Members of the same karass often express their love in the ritual ‘boko-maru’, where the bottoms of feet are pressed against one another. Like a sole-shake.

“Beware of the man who works hard to learn something, learns it, and finds himself no wiser than before,” Bokonon tells us. “He is full of murderous resentment of people who are ignorant without having come by their ignorance the hard way.” Bokonon, in the Books of Bokonon, admits that it is all a lie, right off the bat. There is no deceit.

Don’t be a fool! Close this book at once! It is nothing but foma!

Live by the foma that make you brave and kind and healthy and happy. *foma = harmless untruths

Basically, Bokonon created Bokononism as a relief to those who need it. A lie can be a good thing if it promotes happiness, no? The inhabitants of San Lorezno are thin and dying, starving in poverty. They use Bokononism to make their lives more bearable.

But without bad “Papa” I would be so sad;

Because without “Papa’s” badness,

Tell me, if you would,

How could wicked old Bokonon

Ever, ever look good?

Tiger got to hunt, bird got to fly;

Tiger got to sleep, bird got to land;

Man got to tell himself he understand.

Bokonon’s calypso on trying to understand

The very ending of the book shows Bokonon, sitting on the top of Mount McCabe, with a piece of paper containing scrawled handwriting. John approaches him and reads the final words of the Books of Bokonon;

If I were a younger man, I would write a history of human stupidity; and I would climb to the top of Mount McCabe and lie down on my back with my history for a pillow; and I would take from the ground some of the blue-white poison that makes statues of men; and I would make a statue of myself, lying on my back, grinning horribly, and thumbing my nose at You Know Who. The final sentence within the Books of Bokonon

That is how the book ends. Does this mean, upon reading this, John finishes his account and commits suicide? Is that the end? It seems likely. To discover Bokonon, contemplating his religion. To see him write like this, why did he carry on the charade of Bokononism all this time, if this was how he really felt? Or did he genuinely think he could make a difference, only for ice-nine and the end of the world caused by the events on San Lorenzo shatter his faith in (God/fate/mankind?)

Short and sweet, written simply with a rapid turnover of chapters, Cat’s Cradle is probably one of Vonnegut’s more accessible books. The warnings of humanity’s self-made destruction in ice-nine and the soothing falsities of religion as themes can be as shallow or as deep as the reader wants to take them. Or you can ignore that all together and read about a strange bunch of characters who together bring about the end of the world as we know it.

Someday, someday, this crazy world will have to end,

And our God will take things back that He to us did lend.

And if, on that sad day, you want to scold our God,

Why just go ahead and scold Him. He’ll just smile and nod.

Bokonon’s calypso on the end of the world