From one of the largest and most renowned music festivals in the world, Glastonbury, to surely one of the smallest, which takes place on an island sized at little over two square miles and home to just 600 people. Just four days after returning from Worthy Farm I found myself at a festival still in its infancy; this year being only the 6th iteration of the Sark Folk Festival.

Unknown to most, Sark is one of the smaller Channel Islands, viewable across the waters from the island I reside, Guernsey-much larger in comparison but itself also very small with its population of just ~67,000. In my previous post on Glastonbury I described the post-festival symptoms, and was even a little apprehensive of jumping straight back into the action. Two festivals in two weekends sounded like a great idea at the time… Luckily, and as you may have already guessed, these two festivals offer completely different experiences.

I’ll first talk about the setting itself. Sark is a fantastic, beautiful place, and having grown up so close to it in Guernsey perhaps I’ve taken it for granted. Every time I return I’m reminded how unique a place it is. There are no roads as such but tracks, and you won’t find any traffic here apart from the odd horse and carriage, a tractor here and there, and during the summer plenty of tourists on hired bicycles. A throwback to simpler times, it can be refreshing to visit a place so laid back and indifferent to the rest of the world. During the festival the pubs are active and bustling and of course at the festival site, the atmosphere is buzzing in its own, chilled out, family friendly way. Unlike many other festivals, a 2 minute walk from the festival site (which only spans three fields!) can take you from the cheering crowds and the lively folk music to a gorgeous stretch of coast without a sound. Serene.

The music. This is a folk festival, make no mistake, so expect anything else and you’ll be disappointed. But there are some refreshing acts that try and merge different genres. A local band from Guernsey, Buffalo Huddlestone, make excellent use of an MC (or wordsmith) who raps over a background of acoustic guitars, violins and backing vocals), and have, after several appearances at the festival, gained a cult following. In general the standard of music was very high. I loved it and the raucous, at times unstructered nature, mixed with the slower, more composed, soulful acts. There should be something for most to enjoy, and like most aspects of the festival, you’ll be hard pressed to find anything offering quite the same as the Sark Folk Festival.

The atmosphere at this place is superb, with friendly locals and festival goers intent on having a great weekend. Everything is done at a slow pace. Tickets are highly sought after and dare I say it, equally as difficult to obtain as tickets for Glastonbury, and most of those attending are returnees; you can just guarantee, rain or shine, that you will have a fantastic weekend. The food is fresh and local, and as you might expect from a place surrounded by the sea, there are some wonderful seafood options such as fresh lobster, crab and classic fish and chips. The drinks are just as tempting, with a selection of beers, ales and ciders brewed within the Channel Islands.

Sark Folk Festival was the perfect weekend after the Glasto comedown. I came back with my batteries fully recharged and refreshed. Still plenty of fun, music and partying, but in a chilled out fashion that would be hard to match at any other festival in the UK. 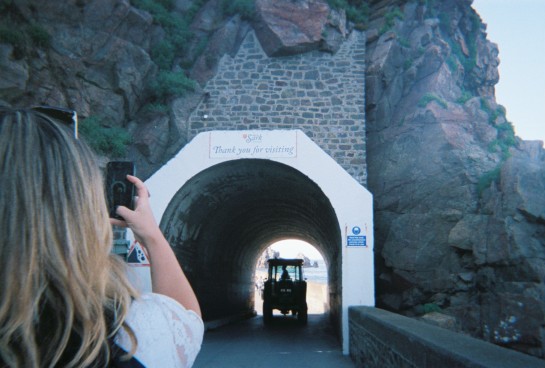