The English classroom classic. I would imagine that Animal Farm was present on most secondary school curriculums and therefore, for better or worse, most have experienced Animal Farm. When I read the book, and I can’t remember quite how old I would have been, I recall a book about animals, mirroring flaws that we see in human nature, and struggles for power, for equality. Yes, the teacher at the time may have made some vague remark about it being very much a political book, but I wasn’t really interested and / or I didn’t comprehend it at the time.

Any commentary on Soviet history and communism would have been completely lost on me. 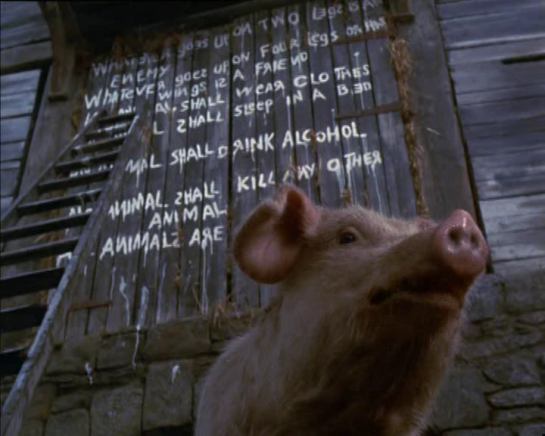 Still from the 1994 live action adaptation. “Politics? I thought it was just a film about some animals”

Now of course, it’s a bit clearer. Animal Farm is a satirical novel, written by Orwell during the Second World War. Swimming in allegory and symbolism, it describes the situation in Europe and Russia, but takes away the main players of Stalin, Trotsky, Marx and Tsar and replaces them with an ensemble of animals; pigs, horses, dogs, sheep, and of course humans. It could be considered a dystopian novel too, in the same vein as Orwell’s other masterpiece, 1984.

We are given a short and direct sequence of events that occur at Manor Farm over the course of several years. Mr. Jones is the farmer and owner of Manor Farm, and his cruel and drunken handling of work and treatment of animals. Old Major, an old boar, prophesies a world where animals are no longer ruled by humans, deriding them as parasites who consume but do not contribute, and teaches the farm the song ‘Beasts of England’. He later dies, and this spurs the animals into revolt.

Their lives now, they reasoned, were hungry and laborious; was it not right and just that a better world should exist somewhere else?

They drive Jones and his farmhands from the farm and rename it Animal Farm. They set out a set of rules to ensure life on the farm is fair and better than under the rule of Jones. Named the ‘Seven Commandments of Animalism’, they are as follows;

Whatever goes upon two legs is an enemy.

Whatever goes upon four legs, or has wings, is a friend.

No animal shall wear clothes.

No animal shall sleep in a bed.

No animal shall drink alcohol.

No animal shall kill any other animal.

All animals are equal. 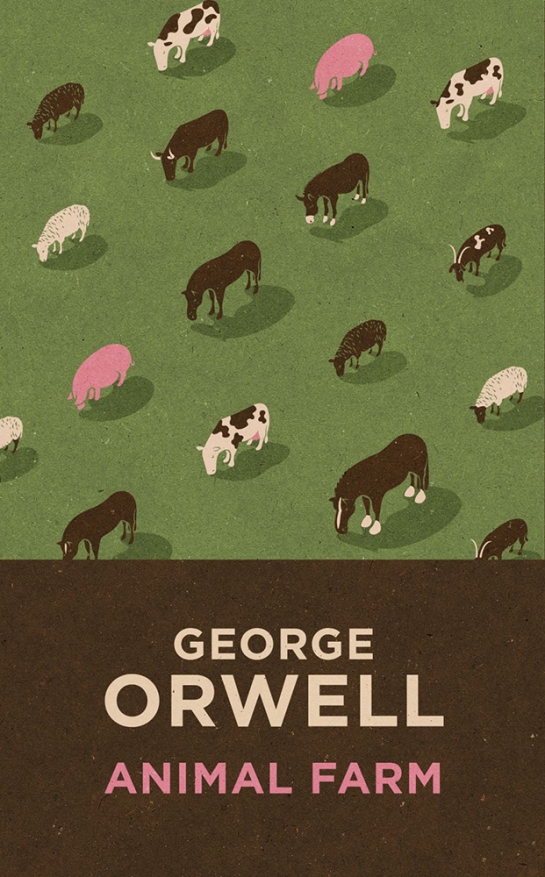 The animals are overjoyed at their revolution, and news of their victory over the humans soon spreads far and wide. Morale is high, the farmyard tasks run smoothly and life is better than ever before. The pigs are elevated to the leaders as they are naturally the most intelligent, and two young pigs Napoleon and Snowball seem to begin a political rivalry for leadership of the farm. Snowball seems the more educated with rational and well thought out ideas, keen for the farm to prosper and develop. Upon announcing plans to build a windmill, which could provide electricity to light stalls and keep the animals warm in the winter, Napoleon ousts Snowball and declares himself leader of the farm.

Slowly, under the rule of Napoleon, a more controlled and ordered rule of the farm comes into play. The pigs seem to have more and more benefits over the rest of the animals.

This work was strictly voluntary, but any animal who absented himself from it would have his rations reduced by half.

Napoleon also begins to manipulate the thoughts of the animals, primarily through a young pig named Squealer, who claims that the windmill idea was Napoleon’s idea all along, and the animals are required to start working hard (very hard) on the construction of the windmill right away. When the partially constructed windmill is destroyed in a storm, Squealer tells the animals that this was an act of sabotage from Snowball.

“No one believes more firmly than Comrade Napoleon that all animals are equal. He would be only too happy to let you make your decisions for yourselves. But sometimes you might make the wrong decisions, comrades, and then where should we be?”

Squealer becomes the charismatic mouthpiece for Napoleon’s regime is Squealer, a pig who spouts propaganda which is lapped up by the animals who have doubts and concerns but ultimately are too afraid of Animal Farm failing, and the possibility of the return of Farmer Jones.

“Surely, comrades, you do not want Jones back?”

Once again this argument was unanswerable. Certainly the animals did not want Jones back; if the holding of debates on Sunday mornings was liable to bring him back, then the debates must stop. Boxer, who had now had time to think things over, voiced the general feeling by saying: “If Comrade Napoleon says it, it must be right.” And from then on he adopted the maxim, “Napoleon is always right,” in addition to his private motto of “I will work harder.”

Snowball soon becomes the scapegoat for any and every problem that the farm encounters, and Napoleon begins to rule with an iron-fist. Any animal suspected of collaborating with Snowball are deemed traitors of Animal Farm and sentenced to death. Boxer the carthorse, the most faithful and hardworking of all the animals, strives to work for the benefit of the farm and collapses, injuring his hoof and unable to work any longer. He was close to retirement, and looks forward to a peaceful end to his life. Napoleon however, sells him to the slaughterhouse, disposing of him cruelly and for his own profit, as the pigs use the money to buy whisky. Instances of cruelty and inequality from Napoleon’s dictatorship continue but through Squealer’s propaganda and the animals fear, the farm reverts back to a state not seen since the days of Jones’ rule.

As the years pass, the pigs have taken on many human traits, such as sleeping in beds, drinking alcohol, wearing clothes – even walking on two legs and carrying whips. And all this despite the initial commandments stating otherwise…but when the animals return to the wall of the barn where the commandments were initially painted, they have been replaced by just a single line, reading:

The animals, exhausted and starving, leave their pens one night to a raucous event occurring within the farmhouse. Napoleon and the rest of the pigs are celebrating an alliance with a local human farmer, and together men and pig are drinking, gambling, laughing. Napoleon announces that the farm shall return to being named ‘The Manor Farm’. As the animals are about to leave the farm for good, they hear curses and shouts and return to the farmhouse window.

There were shoutings, bangings on the table, sharp suspicious glances, furious denials. The source of the trouble appeared to be that Napoleon and Mr Pilkington had each played an ace of spades simultaneously. Twelve voices were shouting in anger, and they were all alike. No question, now, what had happened to the faces of the pigs. The creatures outside looked from pig to man, and from man to pig, and from pig to man again; but already it was impossible to say which was which.

Animal Farm demands a reread. Orwell achieved something special, with a story that can be as simple, or complex as you like. Take it as a sort of fable at face value, a reenactment of the Russian Revolution leading into the Stalin era, or a commentary on the nature and perils of revolution. I believe the book is not strictly a warning on communism, or criticising the Stalin era, (the Russian Revolution and events leading up to WWII), but of all forms of rebellion and overthrowing those in power. Benjamin, the aged donkey who has lived longer than anyone on the farm, speaks very little. He is distant and disgruntled all of the time, and is heard cryptically saying that a donkey lives a long time. He is cynical and wise, and has perhaps lived through many a regime, thus perhaps he has seen this all before. I think he sees that revolution and struggles for power are always inevitable, but in the grand scheme of things living rarely changes or improves for the masses.

Only old Benjamin professed to remember every detail of his long life and to know that things never had been, nor ever could be much better or much worse–hunger, hardship, and disappointment being, so he said, the unalterable law of life.

The cynical, pessimistic but wise Benjamin.

Life will go on as it always has gone on – that is, badly.

If you haven’t read Animal Farm since you were a young mind in school, take another look. It will be a totally different read to what you remember. If you haven’t read it at all, and you aren’t interesting in such a politically charged piece, give it a chance. It still has Orwell’s simple, easy to read prose, and the short length combined with its fairytale feel means it can be digested quickly and easily. And by digging deeper, one of the most read and arguably important books of the past century awaits.