Introducing We, the godfather of the dystopian novel. Written by Russian author Yevgeny Zamyatin in 1921, it has endured a troublesome publication history to say the least. At the time of writing Russia had recently undergone revolution, the rise of the Bolsheviks and the governing of the Soviet Union.

We is thought to show Zamyatin’s disapproval of heavy labour and industry witnessed in England, along with the strict censorship becoming apparent under the Bolshevik regime. Zamyatin’s work was initially, and perhaps unsurprisingly, denied publication in Russia; its first publication came in 1924, an English translation by Gregory Zilboorg. Zamyatin was banned from writing and exiled numerous times. His work was not published in his native country until 1988, three years before the fall of the Soviet Union and an incredible 51 years after Zamyatin’s death, in Paris, in poverty, in 1937.

A man is like a novel: until the very last page you don’t know how it will end. Otherwise it wouldn’t be worth reading.

We is set in the twenty-sixth century A.D., in the walled up nation of the OneState where a totalitarian system presided by ‘The Benefactor’ rules a society where logic and reason preside over emotions and freedom. Taking place a thousand years after the Two Hundred Year War, where it is suggested weapons of mass destruction wiped out the majority of the population, the OneState is a city made almost entirely of glass; thus allowing the Guardians to keep a constant eye on the subservient public. People are given numbers rather than names, and the narrative focuses around the journal entries of D-503, a mathematician and lead engineer of the spaceship INTEGRAL, upon which is a mission to locate and bring happiness to (see: invade and conquer) life on other planets.

Life in those early diary entries doesn’t seem so bad, at least not to D-503. He is assigned a lover, O-90, who must obtain pink slips in order to draw the blinds in his glass apartment and make love. The numbers work and outside of work they visit the auditorium or take part in controlled, synchronised marches across the city. There are public executions. The sky is always blue…

But then, the sky! Blue, untainted by a single cloud (the Ancientes had such barbarous tastes given that their poets could have been inspired by such stupid, sloppy, silly-lingering clumps of vapour). I love – and i’m certain that i’m not mistaken if i say we love – skies like this, sterile and flawless! On days like these, the whole world is blown from the same shatterproof, everlasting glass as the glass of the Green Wall and of all our structures. On days like these, you can see to the very blue depths of things, to their unknown surfaces, those marvelous expressions of mathematical equality – which exist in even the most usual and everyday objects.

When on one of these walks, D-503 encounters the strange woman, I-330. Through her eccentric and rebellious behavior (in which, among other habits, she takes to smoking and drinking alcohol) she makes him feel sick and angry yet has a strange pull on his mind. One day she takes him to the Ancient House, a property (the only one in the OneState not built of glass) on the outskirts by the city walls, filled with antique goods and pieces of history. Steadily his mind is opened to the possibility of the soul, to the happiness and individuality he had not previously experienced under the disguise of the many, the army of ‘we’.

D-503 is torn and both loves and detests I-330, vowing to report her to the authorities but never able to bring himself to do it.

In the widely open cup of the armchair was I-330. I, on the floor, embracing her limbs, my head on her lap. We were silent. Everything was silent. Only the pulse was audible. Like a crystal I was dissolving in her, in I-330. I felt most distinctly how the polished facets which limited me in space were slowly thawing, melting away. I was dissolving in her lap, in her, and I became at once smaller and larger, and larger, unembraceable. For she was not she but the whole universe. For a second I and that armchair near the bed, transfixed with joy, we were one.

Everything used to revolve around the sun; now I knew it all revolved around me-slowly, blissfully, squinting its eyes.

Written as a series of journal entries, the reader witnesses the confusion and conflict as D-503 experiences them. So desperate is he for this account to be used and read by future generations, historians, even other species…he is determined to keep all the crippling doubts, the insane dreams, the sickness he feels as his mind is opened to a freedom the OneState has denied him for his entire life.

And a question stirred within me: What if he, this yellow-eyed creature, in his disorderly, filthy mound of leaves, in his uncomputed life, is happier than we are?

[Directed at D-503] You’re in a bad way! Apparently, you have developed a soul.

After a series of riots and rebellions, D-503 discovers that I-330 is a member of MEPHI, an organisation intent on destroying the iron fist that rules the citizens of the OneState. In response The Benefactor reveals the ‘Great Operation’ – basically, a lobotomy for all citizens, so that they can experience true happiness. As D-503 observes, ‘like tractors in human form’.

D-503 is finally forced, like the rest of the citizens of OneState, to be tied down and submitted to x-rays which removes emotions and imagination from the brain, in order to prevent future riots and discontent. We ends bleakly. D-503 is indifferent. He willingly informs The Benefactor of MEPHI, giving up information willingly on all known members, including the woman whom he loved so dear, I-330. He casually informs of the torture and execution of the MEPHI members, but registers some surprise that despite extensive torture, I-330 gave up nothing.

There is some hope. Through the actions of MEPHI social rebellion is on the rise, and the Green Wall cannot keep out the wilderness beyond forever as birds flock in through the cracks.

We is not an easy read. The narrator admits himself – he is not a poet, not a writer. He is an engineer, a mathematician. He works in equations, calculations, fractions. There is a logical and mathematical answer for everything, and so when his eyes are forced open by I-330 and MEPHI he can barely understand what is happening, let alone explain this coherently. But the more journalistic style Zamyatin has chosen to report his narrative gives a personal feel. The first person perspective allow us to tap into the doubts D-503 experiences, the feelings that are within his very nature, hardwired into the human spirit but that have been repressed, by years of manipulation and engineering. It is sad but fascinating to watch D-503 struggle between what he has always known and what he starts to feel.

Parallels with Orwell’s 1984 are unavoidable, and Orwell is widely known to have been inspired by Zamyatin’s tale. Winston Smith is D-503. Julia is I-330. Big Brother, the anonymous, almost mythical figure of power, is the Benefactor. An intimidating dictator but more human – he is shown to the numbers and to the reader, and D-503 even has a conversation with him. The telescreens replace the glass rooms and buildings. 1984 follows We’s plot and characters with unnerving accuracy. 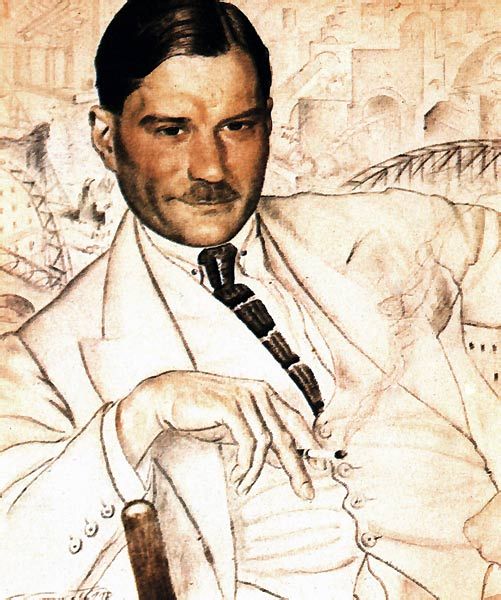 A portrait of Yevgeny Zamyatin, 1923 by Boris Kustodiev

Orwell is quoted as saying ‘This is a book to look out for when an English version appears.’ Perhaps he got tired of waiting and wrote his own version. This is by no means a slight on Orwell. It is written better than We, which I at times struggled to read for the reasons I have criticised previously.

Zamyatin’s future is more mathematical, more precise, more sterile. Technology has fuelled it. Whereas Orwell’s feels more like a response to the threat of war. Both are disturbing in the futures they portray but Orwell’s is darker, bleaker, filled with pessimism. Suitably Orwellian. Zamyatin allows for D-503 to provide an informality, a lighter tone – dare I say a slight more humour, in the way that only the first person narrative of a diary can achieve.

With We, Zamyatin seemingly accepts that together, the collective can grow strong and accomplish incredible technical feats, such as the INTEGRAL. But a stark warning remains within, that the cost of such technology and precision could have on the individual, the happiness and the soul of each.

Orwell’s 1984, Huxley’s Brave New World, Bradbury’s Fahrenheit 451 … may all be more compelling, arguably better constructed stories, more complete in their attempts to illustrate a future that nobody wants. But We got their first. We blazed the trail for dystopian futures, as a platform to air concerns on events that were happening at the time and predict and warn what we stand to lose if these ideals are carried out.