Ubik is a dazzling science fiction novel, which is as unsettling and hard to pin down as it is ambitious and visionary. When it comes to creating worlds and futures, imaginative and brave beyond belief, Dick is right up there. His writing may be somewhat lacking in comparison to the greats. He doesn’t have a distinctive style; a relatively simplistic prose that rarely leaves the reader breathless. Rather, he lets his visions and ideas do the talking, and it is these that compel the reader to continue.

Dick describes to us another fantastic manifestation of his wild imagination. In Ubik, the year is 1992 and space travel is commonplace, with humanity capable of colonising on other planets, including the moon. The protagonist is Joe Chip – an employee of the Runciter Association. They are a ‘prudence organisation’, and Joe is a tester, whose job is to measure and verify the potency of ‘intertials’ or anti-psis. These are individuals who can negate the psychic powers of individuals with psionic abilities, who are often hired to commit acts of business sabotage. Joe’s boss and employer, Glen Runciter, runs the association with help from his deceased wife, Ella. Yes – deceased. Another aspect of the future presented in Ubik is the ability to cryonically store the dead and communicate with them, albeit in a slightly limited fashion. This suspension, known as ‘half-life’, allows the dead a limited state of consciousness and the ability to speak to former loved ones, family and friends.

It touches on, but never really investigates this new culture of psychics and inertials. It’s a fascinating subject – and the fact that Dick goes down a path where they aren’t fully explained is bold. Like I said, I would have expect this great battle between Runciter Associates’ inertials and Hollis’ psis on Luna. But on Luna, the situation changes, and the narrative begins to revolve more around the method of half-life.

Personally, there was some slight disappointment that the plot didn’t go in the direction I expected to. But whose fault is that? Certainly not Dick’s. The pieces were being arranged for a battle between Hollis’ psis, and Runciter’s inertials. And we do get that – kind of. But I expected these psychic and psionic abilities to play a much more forward role, and the half-life technology to take a backseat (as interesting and imaginative as it is).

When reading a book, the majority of the time you have an idea of what type of book it is shaping out to be. A hunch of what is going on, who the main players are, where the plot is going. Ubik is different. As a reader, moments are few and far between where you feel ‘safe’. I attribute safe to understanding. Dick is a master at pulling the rug out from under you. But in Ubik, he yanks that rug chapter after chapter. You will feel battered and bruised, and thoroughly confused.

There are a multitude of characters; the nature of the narrative means some are, not underdeveloped but perhaps underused. The focus remains on Runciter and Joe Chip throughout, with a few more key players being introduced later on. Glen Runciter is a well respected, experienced businessman who is admired by his employees. After the events on Luna there seems to be a real sense of shock at the loss of this great man. But he is resourceful and cunning – the trail of breadcrumbs he leaves for Joe and the group allows them to ‘wake up’ and realise the danger and reality of their situation. And Joe Chip – a faithful employee of the Runciter Association, he is clearly talented and rated highly by his boss and friend Glen Runciter. But he is not without his faults. There is a hint of unused potential, and his poor handling of personal finances and disorganised living quarters is a cause for some ridicule and disrespect.

From the drawer beside the sink Joe Chip got a stainless steel knife; with it he began systematically to unscrew the bolt assembly of his apt’s money-gulping door.

“I’ll sue you,” the door said as the first screw fell out. Joe Chip said, “I’ve never been sued by a door. But I guess I can live through it.”

The Runciter Association’s main rivals are run by a man named Ray Hollis, who runs an organisation of psychics. Given a lucrative contract by the powerful businessman Stanton Mick, Runciter organises a party of 11 of his inertials, as well as Joe Chip and himself, to travel to Mick’s lunar facilities on the moon, where the anti-psis will be used to negate the telepaths ability and enforce privacy. However a trap has been set, no doubt orchestrated by Hollis to cripple his rival, and a bomb kills Runciter and leaves the rest of the employees in complete disarray. They panic and flee Luna, desperate to escape with their lives and to get the dying Runicter into ‘cold-pac’, so he can continue to advise and run the Runciter Association from half-life.

When that bomb explodes, everything changes. Runciter is killed. Or is he? What follows is a pseudo- crazy trip through time and the past. Reality is seemingly changing radically all around the group, and it becomes clear that not all is as it seems.

A bizarre state of decay and rapid ageing is following the group everywhere. Stale cigarettes that crumble when taken out the packet. And more grotesquely, dried-up and desiccated corpses of the Luna expedition.

Bizarre, existential questions then start being asked within the group. Was Runciter killed in the explosion? Is it, in fact, the group that died, and Runciter that survived? Did anyone die…or are they all dead, communicating with each other in half-life? 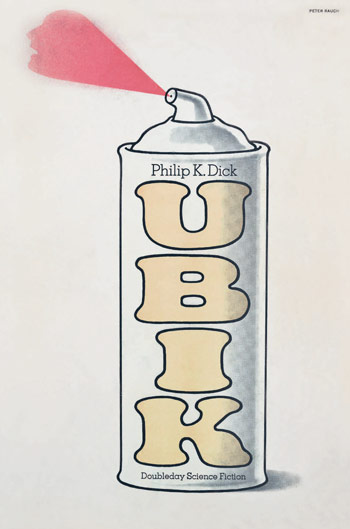 At the same time, it appears Runciter is attempting to contact his former employees. Joe Chip hears him through his hotel telephone. His face appears on currency. And most importantly, Joe Chip witnesses an advertisement featuring Runciter promoting a bizarre product; Ubik. At the start of each chapter, an advertising slogan is featured, praising Ubik as some sort of wonder product that can be used for anything and everything. Yet in the narrative it is not introduced until the last act.

Instant Ubik has all the fresh flavour of just-brewed drip coffee. Your husband will say, Christ, Sally, I used to think your coffee was only so-so. But now, wow! Safe when taken as directed.

My hair is so dry, so unmanageable. What’s a girl to do? Simply rub in creamy Ubik hair conditioner. In just five days you’ll discover new body in your hair, new glossiness. And Ubik hairspray, used as directed, is absolutely safe.

It appears that Ubik is an agent (most consistently found in the form of a spray can) which can ‘restore the effects of aging’, and has possibly been created by those in half-life – as a way of protecting themselves from stronger, hungrier minds that can devour others in half-life to extent their own time in this bizarre limbo.

I am Ubik. Before the universe was, I am. I made the suns. I made the worlds. I created the lives and the places they inhabit; I move them here, I put them there. They go as I say, then do as I tell them. I am the word and my name is never spoken, the name which no one knows. I am called Ubik, but that is not my name. I am. I shall always be.

There are several theories but the strongest comes from Dick’s wife Tessa, who in her essay ‘Ubik Explained, sort of’, she wrote “Ubik is a metaphor for God. Ubik is all-powerful and all-knowing, and Ubik is everywhere. The spray can is only a form that Ubik takes to make it easy for people to understand it and use it. It is not the substance inside the can that helps them, but rather their faith in the promise that it will help them.”

This is a difficult book to write about. Having read some Franz Kafka recently, I would describe Ubik as incredibly kafkaesque. A spiralling sense of confusion and incoherence. The unease you will feel of an impending danger or doom.

Ubik is a book I suspect the reader would benefit from reading more than once. If I didn’t have such a huge backlog I’d probably be reading it now. But it might benefit from a few months on the shelf as my subconscious tries to figure out what the hell just happened.

We are served by organic ghosts, he thought, who, speaking and writing, pass through this our new environment. Watching, wise, physical ghosts from the full-life world, elements of which have become for us invading but agreeable splinters of a substance that pulsates like a former heart.