Cormac McCarthy is one of my favourite writers and Child of God (1973) was his 3rd novel. At only 208 pages long it is a short but harrowing read that I ended up finishing over the course of a weekend. I had to keep coming back to it, to McCarthy’s masterful writing style and his horribly flawed, highly disturbed yet ultimately compelling protagonist Lester Ballard.

Child of God follows Ballard in 1960s Tennessee, a violent and disturbed outcast who is shunned by society and throughout the course of the novel descends into more despicable crimes and degradation.

Firstly, Lester Ballard is not a nice person. We are introduced to his fiery temper from the start, threatening at gunpoint an auctioneer who is attempting to sell his family’s homestead. A squatter who has clearly not spent much time around people, Ballard is deranged and as the unknown narrator states, ‘a child of God much like yourself perhaps.’ 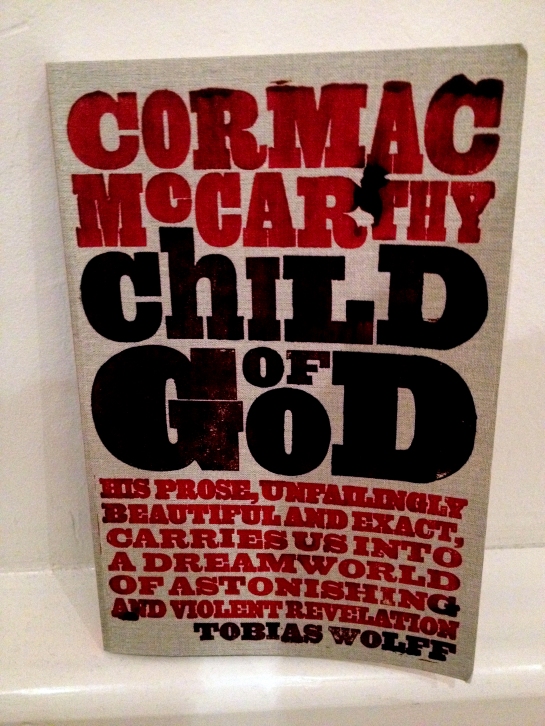 A parentless child (who came home to his father hanging, and his mother abandoned him soon after), Lester learnt how to survive but not how to socialise. Steering clear from the more civilised aspects of life, we see Ballard as he drags his meagre belongings from house to house, squatting and sleeping rough while feeding on scraps. Whilst a voyeur to a couple having sex in a car, ‘Ballard, unbuttoned, spent himself on the fender.’ Upon discovery, Ballard flees, ‘a misplaced and loveless simian shape scuttling across the turnaround as he had come’. Unable to commit to normal relationships, he lives a lonely existance. Even when he finds himself surrounding by people, winning three large stuffed animals in a shooting gallery at the town fair, he can only focus on the faces of young girls while fireworks dance above the crowd. Disturbed and repulsive as Lester is, I felt some sympathy for him.

That was until the start of Act II, where Ballard stumbles across the bodies of a young couple in the back seat of an abandoned car. A fascinatingly disturbing scene follows, in which Ballard leaves the car but ends up returning again and again; it is money that brings him back initially, but in a shocking account of sexual deviancy, the disturbed Ballard commits the sickening act of necrophilia. Be warned, the following quotes are incredibly disturbing. “A crazed gymnast laboring over a cold corpse. He poured into that waxen ear everything he’d ever thought of saying to a woman. Who could say she did not hear him?”

Having dragged the girl’s corpse back to his current dwellings and hauling her into the acting (with some difficulty), he then goes into town and spends the money he stole from the dead couple to buy dresses and underwear for the girl, as well as food for a fancy meal. Lester loses this ‘first love’ when the house he is squatting in burns to the ground. With his extensive knowledge of Frog Mountain and the surrounding Servier County, he moves his belongings into a system of caves, and takes action. He creates new partners for his unspeakable relationships by carrying out a series of murders of young women, shooting them with his rifle and carrying them back to his subterranean dwelling.

The novel often follows Ballard alone. Interactions with others are rare and when they do occur tend to disturb and unsettle you, leaving you cold. Ballard has undoubtedly led a cruel and isolated life. I won’t go into detail of the novel’s conclusion, but we see Lester continue his decline. After the Servier County Sherriff suspects Ballard of murder and arson of a local household, he is taken into the station. While they are unable to prosecute, they know they are dealing with a sordid man with little humanity left. An almost desperate but futile attempt to speak to Lester, and a quote that I stuck with me.

‘Ballard, he said. You are either going to have to find some other way to live or some other place in the world to do it in.’ Ballard does not fit into modern society; and by this point the reader knows he is too far gone for there to be any redemption for this character.

No matter how dark the scene or despicable Ballard’s actions, McCarthy paints it in such a way that it evokes compassion for the deeply flawed protagonist. This novel is extremely difficult to read in parts, and I expect its grotesque events have put of many a reader. But as a character study there are few as compelling, tragic and repulsive as Lester Ballard in Child of God.