“Then suddenly I saw it. With only a slight churning to mark its rise to the surface, the thing slid into view above the dark waters. Vast, Polyphemus-like, and loathsome, it darted like a stupendous monster of nightmares to the monolith, about which it flung its gigantic scaly arms, the while it bowed its hideous head and gave vent to certain measured sounds. I think I went mad then.”

I loved reading when I was younger and throughout my teenage years, but as mentioned in my first post my university course was intense and I had very little time to do anything outside of my coursework. Stephen King was an author I was always very fond of (The Stand, Under The Dome and From a Buick 8 being my personal favourites), and King was inspired and influenced tremendously by the works of H.P. Lovecraft. I had been aware of Lovecraft and the ‘Cthulhu Mythos’ but knew very little else, and decided on a whim to purchase a collection of Lovecraft’s short stories a few weeks after completing my architectural studies.

Written by H.P Lovecraft in 1917, Dagon is a short horror story and a return to the writing of weird fiction in which Lovecraft had abandoned in 1908 after showing much promise. Being my first introduction to Lovecraft’s work, and despite being a very brief tale which is not considered anything close to his best work, I found it a fantastically well written, descriptive and suspenseful tale. An impressive feat for a read that can be finished in about five minutes. In addition, I felt excitement to have discovered an author with a style that really worked for me.

Set during the early years of the First World War, the unnamed protagonist tells the reader of his current predicament. Currently under immense mental strain and addicted to morphine, he is considering suicide and recalls the circumstances which brought him to this dire predicament.

A merchant on a cargo ship, the narrator had been crossing the Pacific when his ship was intercepted by German forces. Taken prisoner, he was able to escape after a few days on a small craft with water and supplies. After drifting on the vast ocean for some time, he awakes to find he is stranded on an vast, unknown landscape, complete with the smell of rotting fish and other unknown fragrances. “The region was putrid with the carcasses of decaying fish, and of other less describable things which I saw protruding from the nasty mud of the unending plain.” He deduces “Through some unprecedented volcanic upheaval, a portion of the ocean floor must have been thrown to the surface, exposing reins which for innumerable millions of years had lain hidden under the unfathomable watery depths.”

He begins a two day hike, walking towards a rise far in the distance. He reaches the rise, which is in fact a mound on the edge of an “immeasurable pit or canyon”. He begins to descend when he is awestruck by a gigantic stone column on the opposite side of the chasm, emerging from a channel of water at the bottom of the valley. “…I was conscious of a distinct impression that its contour and position were not altogether the work of Nature…despite its enormous magnitude, and its position in an abyss…I perceived beyond a doubt that the strange object was a well-shaped monolith whose massive bulk had known the workmanship and perhaps the worship of living and thinking creatures.”

An otherworldly creature then emerges from the water (see opening quote) and worships the monolith in a horrifying ritual. The narrator flees back to his stranded boat, insane with fear, and cannot recall anything but a great storm.

When he awakes, he is in a San Francisco hospital, having been rescued from the Pacific by a passing ship. With no reported earthquakes or plate upheavals, and a story he is sure no one will find believable, he is reduced to a haunted, nightmare induced existence where morphine provides only temporary relief. As he finishes his suicide note, the story ends with a noise at the door, and the narrators fate left uncertain. “It shall not find me. God, that hand! The window! The window!”

While I thoroughly enjoyed Dagon, part of me was also craving answers from the story. We get a horrific yet tantalising glimpse (as with many of Lovecraft’s writings) into the unknown, and our imaginations are left to fill in the rest. Where was the narrator? How did this strange landscape become accessible? Who built the monolith? What was that creature? Who or what was it worshipping? Or was the account actually a sunstroke induced nightmare which frightened the protagonist so much he is convinced it is real?

For what it’s worth, I believe Dagon (the Fish-God from ancient Philistine legend, as hinted at in the story) is a deity or god-like figure for this race of aquatic monsters that our narrator has stumbled upon. How the narrator got there is unimportant, but as the ending suggest, perhaps he witnessed something that he was not meant to see.

A frequent Lovecraftian theme deals with issues that are so alien, so different, so utterly incomprehensible to our human nature and the world and laws that we know, that exposure to these abominations are enough to make us mere humans go insane. The creature itself is not described in much detail. This is a feature of Lovecraft’s story-telling; he may begin to list off elements of a creature or locations appearance, but will often trail off to leave the horror of this otherworldly beings to the imagination of the reader.

Visualising and illustrating this creature is of course open to interpretation. The term ‘Polyphemus-like’ refers to Polyphemus, the gigantic one-eyed cylclops from Greek myth Homer’s Odyssey, which at least gives us some sense of size and that the creature, despite its other hideous features is probably anthropomorphised. Below I have included a quick sketch from the key scene in Dagon, with the narrator reeling in horror at the sight of this hideous being emerging from the water.  Just searching images of Dagon through Google bring up a variety of different visions of how this creature should look, which leads to some interesting and creepy results. I aim to recreate this scene in much more detail at some point. 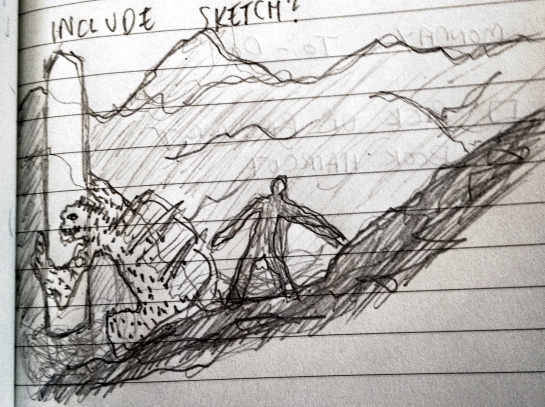 A very quick sketch to visualise the key scene. Working on a follow up.

Lovecraft describes the monolith in some detail, but when it comes to the finer points we again see evidence of creating fear from the unknown. “Of their faces and forms I dare not speak in detail; for the mere remembrance makes me grow faint. Grotesque beyond the imagination of a Poe or a Bulwer, they were damnably human in general outline despite the webbed hands and feet, shockingly wide and flabby lips, glassy, bulging eyes, and other features less pleasant to recall.” Readers familiar to Lovecraft will note a clear resemblance in this description to the Great Cthulhu in The Call of Cthulhu. Written in 1926, it shares several similarities to Dagon. Many view it as a more expanded rewriting of Dagon and some of the themes and concepts are written and improved on (I aim to write in more detail on this story at a later date).

Indeed, Dagon is rarely mentioned by fans and critics when discussing Lovecraft’s best and most influential works, or their personal favourites. But now after reading over a dozen of Lovecrafts stories, this early piece still remains a favourite of mine, perhaps due to it being my first exposure to Lovecraft’s writing, and its accessibility makes it a firm recommendation to any horror fiction fans who have not experienced Lovecraft before.